The Fraternity of Strangers 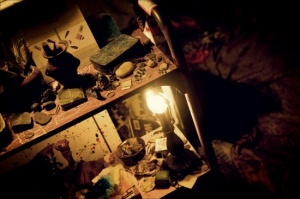 I leave the light on for her now, just in case she ever finds her way home.

She won’t see it – she can’t. I learned my lesson the first time she turned up, scratching at the door like a cat and scaring me and Zaid half to death. The room’s all closed up from the inside, now, the gaps between the boards and planks covered over with some electrical tape we found in the hardware shop on Kingsland. I can’t afford anyone to find where we are. Well, where I am. Safe spaces are hard to come by, even harder to keep, and this one’s mine.

But yeah, I don’t know. Even with the cracks taped up, I feel like she might just know that the light’s on, waiting for her. If there’s enough of her left – enough of the Marta I know, that is – maybe she’ll feel the warmth of the brass stand as it heats up under the greasy fingerprints she left behind.

All her treasures are still here – the pieces of crap she picked up whenever we went out. You could never tell what she’d grab, her skinny little hands forever on the go like little hermit crabs in the sleeves of that stinking, over-sized tweed coat she wore. Pebbles from the side of the Thames, old coins off the pavement, pieces of thread – all arranged on the little iron trolley in the corner like Lady Muck’s dressing table.

Funny really, from someone like Marta. Drab like a moth, she was. Was; is. Funny how quickly people become past tense in a world like this; I know she’d talk the same about me, if you could get her talking. But yeah, she’s like most of us, really, I suppose: jittery, dirty brown, battering ourselves stupid against the glass without knowing why, trying to get at something we’ll never really have. All the while, we get our wings scorched and tattered until we’re down here for good, crawling through the dust. Ashy brown hair, grey skin, hazel eyes behind thick glasses; Marta the moth. I don’t know if she’d find that funny or not – she’s a hard one to read.

Mornings rise to the top of this filthy city like milk blooming on old tea. I suppose that’d make us the dregs, then, the bits at the bottom of the cup that our dads would never drink. Sometimes it barely gets light at all, especially in winter, and that sends a lot of people funny. Desperation does funny things to folks, and it’s a toss-up who’s more dangerous in my mind – the things we’re hiding from or the people who are hiding just like us.

About 5am, usually, I click the light off and try to sleep for a few hours. The mattress where Zaid slept is bare now; I left the covers on there for the first two nights, humped up where he’d left them, but it got too cold and I dragged them over to my space. I’m not going to lie and say it’s what Zaid would’ve wanted – he’d be seriously pissed if he knew I’d scabbed his blankets – but the fact is, he’s not coming back. That’s the difference between Zaid and Marta: I know for a fact that Zaid won’t be back.

The empty space in Marta’s corner of the room is where a lot of my nightmares come from now. It’s rough luck, getting judged by an empty mattress, but there it is. I see her sitting there sometimes, watching me like some kind of owl, and I want to ask her if she’s a ghost or just an echo. I’m too afraid she might answer.

I leave the light on for Marta, even though it’s been three days now. If this was a story, I’d be out there looking for her. If this was a story, we would never have been separated. I’d have gone back for Zaid when he shouted me, begged for help, and I’d have gone after Marta when she legged it. But it’s not a story, it’s life. I don’t know if she’s coming back – I don’t know if she even can. And if she can, whether she would. Did she see me run? Did she watch me go?

Last night, I started to peel a bit of the tape off the window. I could feel safety leaking out of the room like air from a balloon and I smoothed it back down after a few minutes, heart pounding. It took everything I had to leave the light on after that. I’m not a hero, I never was. I didn’t ask Marta to come here, but I’m sorry she’s gone. Sorry for me or her, I don’t know.

Someone once said it’s better to light a candle than to curse the dark. Maybe I’m greedy, but I do both.

Lorrie Hartshorn is an English literary and speculative fiction writer, whose work has appeared in The F-Word, FlashFlood, Six Sentences, 1000 Words, The Pygmy Giant, Six Words Magazine, Anthem and Vagabond. She is also a busy self-employed copywriter, editor and translator, meaning that her valiant attempts to write the next Great British Novel are frequently abandoned but never quite forgotten. She blogs at circlesunderstreetlights.wordpress.com.

This site uses Akismet to reduce spam. Learn how your comment data is processed.